Peter: An Example of God’s Grace 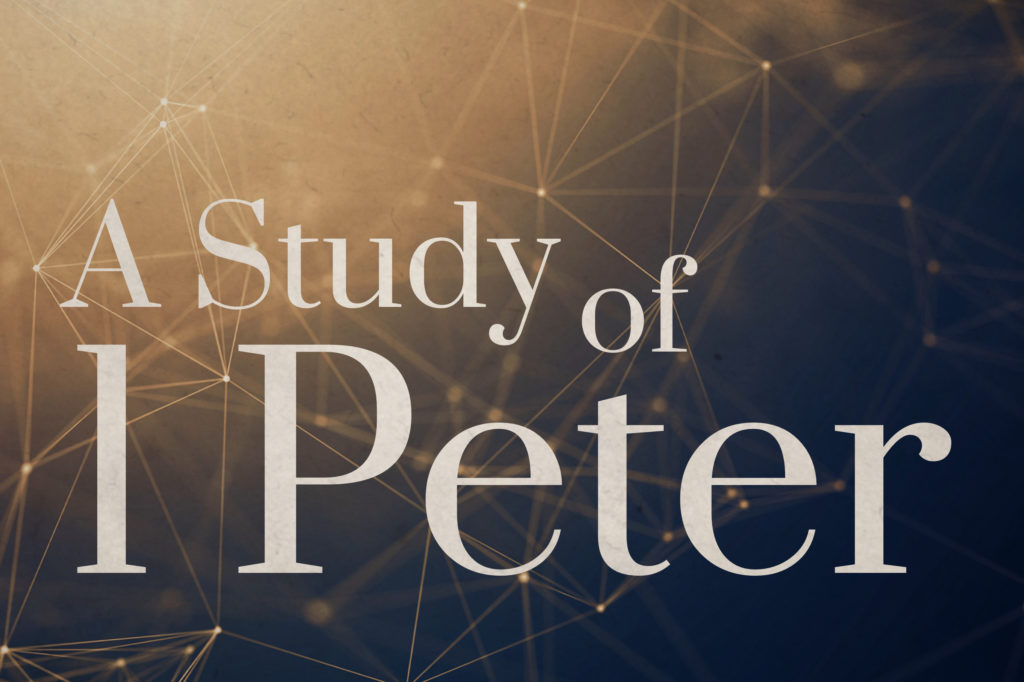 Ill. Marv Johnson.  This morning I was introduced to a very special person to my wife.  Elaine Johnson was here.  Elaine’s husband, Marv, was the pastor from River Falls who helped this church get started.  Pastor Marv & Elaine had quite an influence on college students who went to River Falls.  Over the years I have met people who Mary told me were products of the ministry of the Baptist Student Fellowship—people like the Roehls in Brazil & Dr. Dell Johnson.  Elaine said that once Marv counted 67 people in the ministry that came through that ministry.

App. There is no doubt that God uses people to have great effects on our lives.  We need to be sure to strike the right balance:

Paul just got done saying he was a “spiritual miscarriage” /  “abortion”—KJV reads “born out of due time.”  Previous to this he speaks of all the people who witnessed Jesus’ resurrection—but in his case, the Lord showed Himself AFTER He ascended.  This was also AFTER he persecuted followers of Christ.  He was totally undeserving to be anything, besides being someone to whom Christ showed Himself.  So he calls himself an “abortion.”

But God’s Grace raised this “miscarriage” from his spiritual death to become one of Christ’s Apostles.  And Paul says, “It was not done in vain to him, because he labored more abundantly than anyone”—but he stops here and says, “Yet not I, but the grace of God which was with me.”  This strikes a good balance.  There are clearly faithful & unfaithful followers.  There are clearly those who labor and those who labor abundantly.  Yet, no one can say, “Look at me.” Why not?   Because in the end, it is only by the Grace of God.

Theme: As part of our Introduction to the Epistle of 1 Peter, we’ll take some time to look at this man’s life who also is a Trophy of God’s Grace.  This was a man who walked with Jesus Christ.  He experienced some tremendous experiences like walking on water & the Transfiguration.  He saw the miracles Jesus did.  He also knew the Great Grace of the Lord to be restored after a miserable failure of denying Christ even when warned it would happen.

Peter certainly is a special person in God’s “Trophy Case”:

In all four of the gospel accounts as well as the first several chapters of the book of Acts, Peter stands out as a prominent character.
He very quickly comes to the forefront of the band of disciples, often acting as the chief spokesman for the group.
Christ dealt very personally with Peter, perhaps more so than with any other single character.
Peter is also the most human of all the Bible characters. In him are seen all the faults and failures so common to the human race.
Yet God made this man a great warrior for the truth and a useful servant to the church.

It is, therefore, worthwhile to take an abbreviated view of Peter’s life and development.

What do you know about his conversion?

He first findeth his own brother Simon, and saith unto him, We have found the Messias, which is, being interpreted, the Christ. And he brought him to Jesus.

And when Jesus beheld him, he said, Thou art Simon the son of Jona: thou shalt be called Cephas, which is by interpretation, A stone.

Simon was his real name.  Jesus nicknamed him that day.  He is now Cephas which is the Aramaic version of petros, “stone” or “rock.”  What did Jesus see in him that day? Rarely will he be referred to by his old name, Simon.  What great potential this man had—potential for good or evil.  Under the Lord’s control, he would be used greatly.

App. This is true of all of us.  We all have gifts & abilities that have potential.  What do we do with them for the Lord?

What are some of the things that made this call & response so significant?

A willingness to speak up for the others who were likely feeling like he was.
Obedience to the Lord to use his boat and to try fishing again.
A consciousness of God’s power and his own contrasting sinfulness.
An immediate obedience to follow Christ.

Sometimes we say God can use anyone.  Is that true?  Do we need to qualify that statement?

Peter was a common man, not formally educated or an official leader.  Christ was not looking for those skills.  Those can be taught, but willingness and obedience is something that must come first.

Here are some facts we learn about the calling of the twelve:

There are four lists of the disciples in the synoptic gospels and the book of Acts.
Peter always comes first in those lists and Judas always comes last.

What do we learn from this passage was Christ’s purpose for calling Peter and the other disciples?

What correlation is there between the two?

The success of the second part is always in direct proportion to the first part.  Christ’s goal was to “send them forth”.  Before that would happen they needed to “be with Him.”  “To send them out” refers to them going out after Jesus would leave.

We need the preparation of spending time with Christ.

The Lord used numerous experiences to impact the life of Peter. Look up the following passages and share what lessons were learned by Peter: (share why this lesson from the verses)

He learned to share what God had revealed to Him.
He learned to accept all of God’s truth even when He didn’t like it.
He learned that God’s revelation is something that builds on earlier revelation (as we obey and accept it we learn more).

Remember Who has the glory – Christ should be central to our ministries and lives (It is in Him that God is well-pleased.)
Glorious experiences should not distract us from the continued work we are called to do (They could not set up tabernacles and just stay there.)

Rewards for service are not mainly in this life.
All true sacrifice for the Lord will be amply rewarded.

We must have a servant’s heart.
What we want is secondary to God’s plans.
Obedience is necessary even when we don’t understand.

Don’t trust your flesh; you are capable of far worse than you think.
Bold claims are not enough to withstand temptation.

Because we will all fail, we must be ready to repent.
We cannot live by our own self-will; the Lord must be our strength.

God can forgive the worst of sins.
We can be brought back to a place of fellowship and service even after great failure.
Perhaps we need to return to the work He called us to and complete the obedient path He intended.

How should we view the trials that come into our lives?

James 1:2ff – My brethren, count it all joy when ye fall into divers temptations…  If we believe in God’s sovereignty we know that nothing is by accident the Lord allows us to go through.

His ConsecrationAfter a period of intense training and growth in grace, Peter is at long last prepared for service.  While still an imperfect man, he was nonetheless a faithful servant of God until the day of his death.

He is Designated as Leader from the beginning – Acts 1:15-26

Peter took charge of what has been described as the first business meeting in the New Testament.  He defined the issue at hand and gave direction for its resolution by calling for a vote based upon prayer for divine guidance.

It is significant that while serving as the first pastor of the first church, Peter was also the first man to publicly proclaim the gospel after the resurrection and ascension of Christ.  His preaching resulted in 3,000 conversions at Pentecost.

After Pentecost, we find the first miracle of healing in the Church and once again we find Peter in the forefront.  The crowd attracted by the miracle became a new opportunity to preach Christ.

His position of leadership thrust Peter into jeopardy with those same religious leaders that had rejected and crucified Christ.  This man who had previously denied the Lord now stands firm in the faith, even at the threat of persecution.

Peter writes about rejoicing in suffering.  He certainly knew what he was talking about.

His Denunciation of Sin – Acts 5:1-11Spiritual leadership requires zeal for the purity of the church. Cowardice on that point would destroy the faith.  It is this same jealousy for the truth that prompted Peter to write his second epistle.

His Determination under Pressure  – Acts 5:17-41Christ had plainly told the disciples to expect the opposition to an unbelieving world.  The cruel hand of persecution and the attending pressure to abandon ministry has begun.  Peter acting as the leader gives voice to the determination of the church to be faithful to Christ.  Note also that the believers were able to suffer joyfully without a martyr’s complex.

His Dispensation to the Gentiles – Acts 10:1-41While Paul was the apostle to the Gentiles, it was Peter who actually opened that frontier to the preaching of the gospel.  He did so by revelation. As is apparent from Paul’s comments in Gal. 2:11-14, Peter was most susceptible to Jewish pressure about contact with Gentiles, yet he was used of God to reach Gentiles on this occasion.

His Duration of Suffering – Acts 12:1-11The sufferings of Peter for the cause of Christ were generally continued throughout his life and ministry.  The book of Acts shifts the focus in Chapter 13 from Jerusalem to Antioch and from Peter to Paul.  This does not mean that Peter did not continue to play a major role in the church.  The very existence of the epistles of Peter, make that fact quite clear.  The balance of his life and ministry is not described in Scripture.  Tradition records that Peter died by crucifixion.

Peter’s life is an example of what God’s grace can do with a life yielded to Him.

How are you like/unlike Peter?  What kind of character changes do you need to undergo?  Could God use you in the same way?